This page reviews six developmental theories on children's growth through childhood and adolesence to adulthood and relates them to examples of children's literature that correspond to the developmental characteristics.

Erikson’ developmental model describes a series of five levels characterised by psychosocial crises, which individuals must successfully resolve for them to mature to the next level.

Of prime importance in resolving these conflicts are adults who care for the child and the interactions in which they are involved.

Maturation occurs as each individual progresses from one stage to the next.

Enjoy stories with search for identity is linked to becoming a person with identity: identity linked to a cultural, personalities, and a community (families, groups, sports, gangs...)

Kohlberg's theory is divided into three levels with two stages per level. Each stage is slightly more complex and more effective than the prior. As children, adolescents, and adults, assume more responsibility they may progress through the six levels.

People understand their present stage, all below, and the one immediately above. They may revert to lower stages during stressful times. If a teacher or person in authority uses a control strategy at a level below the student's current level, the student will feel humiliated and may regress to that level.

Essentially all good literature deals with values and can play a role in value formation. To do so requires situations that put the characters into conflict with the values of society and slightly above the current level of the reader/viewer to provide readers opportunities to compare and contrast their values against values of the characters that they admire.

Stage one is characterized by a pain-pleasure response for individual satisfaction. Control with the use of physical force for compliance. Short-term effect, physical constraint and physical abuse.

Stage three is characterized by a perception of the social order as a need to please, help, or conform for the benefit of the group. Control with peer pressure and concern for feelings of the group. Range from cooperation and working together and helping each other to ostracism and shunning or shaming a person and making them an outcast.

Stage four is characterized by a perception of a need of duty to obey social rules and regulations to maintain social order to have an ordered society. Control with individual responsibility. Legal systems with an over reliance on legalism and laws carried to extremes.

Stage five is characterized by individuals that attempt to define moral principles as social-contracts, or legal-contracts based on an understanding of principles of justice and a democratic community. Control is by governance and sanctions based on general democratic principles: fairness, equity, toleration, freedom of thought ...

Stage six is characterized by universal justice and ethical considerations that respect the dignity of individuals. Control is principled self-control.

Maslow's Hierarchy of Needs for Life and in Literature 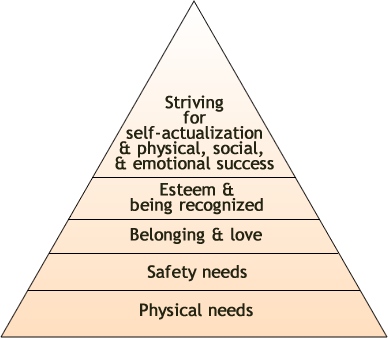 Hierarchy of Needs Levels from lower to higher:

Knowing Maslow's Hierarchy of needs helps to understand literature; as good authors tell stories that are plausible and realistic because their characters are based on real life people who develop as Maslow observed. Therefore, knowing Maslow's Hierarchy of Needs will help understand character traits, character development, how plots unfold, different themes included in stories and other characteristics, which will help you to better appreciate quality literature.

Physical and Safety Needs: physical security begins in mother's and father's arms, includes eating and sleeping and expands to what individuals need for comfort and well-being. Material possessions and physical setting can include symbols of security. Stories that tell of people with enough food and clothing. Tales of brightly burning fires, feasts, rich clothes, glittering jewels, and splendid palaces. The lack of security is one of peoples most pressing needs, very often it is central to the plot, motive for acting, or the theme of the story. Robinhood, Cinderella, Sounder, ...

Need to belong: to be part of a group, For young children this starts as an egocentric desire or part of self-love. Children say with pride MY mama, papa, brother. Stories about family, neighborhood, community, school, Beverly Cleary for the middle grades. When a child wishes they could know the characters, help them, or be with them, they are widening their awareness of belonging and strengthening their idea of community and acceptance of others who may or may not be similar to them.

Need to achieve competence: begins with the infants exploration of talking, crawling, walking, and continues to the athlete, mathematician, artist, musician, or scientist. Need to interact effectively with the environment is a very strong motivating force. The important factor of book heroes is the unique feats they performed on their own. Found in the study by Mary J. Collier and Eugene L. Gaier "The hero in the preferred childhood stories of college men",

Need to know: child's constant curiosity and why questions. Need to investigate, to know for sure, a hunger for knowledge.

Need for beauty and order: music, dance, drama, story, painting, sculpture. The child seeks aesthetic satisfaction and the development of ones tastes by enjoying one piece of literature after another.

Beauty in Literature the interplay of the elements of literature and multiple themes organized in a fascinating story of intrigue and character development.

Each stage has major characteristics associated with it.

Is a wolf in sheep's clothing really a sheep? or a wolf? Is this both conservation and reversibility.

Books that squeak, talk, or make noise, Books that have zippers or other manipulatives, Pop up books,
Nursery rhymes and songs with actions.

Animal stories for this age:

Learners are better able to conserve, use reversibility, and transformations.

Books by Beverly Cleary and Mary Stolz present day to day situations to which children can relate.
The Not-So-Wicked Stepmother, shows conflict within self and others
The Stone-faced Boy, Paula Fox;
The Bear's House, Marilyn Sachs
The Great Gilly Hopkins, Katherine Paterson
Peter Pan,
James and the Giant Peach,
Tuck Everlasting,
Indian in the Cupboard,
Chronicles of Narnia,
Crow Boy,

Compelling stories for children to interact with problems and emotions of teenage characters in an expanding world.

Bandura and Vygotsky describe human learning as a social event of observing, modeling and interacting with others. Mirror neurons provide a powerful basis for humans to imitate and learn behaviors from others even with out reward or punishment.

Learning is also affected by how a child relates to others. Relating best to others who are similar to their personal view of them self. This being related to each person's cultural identity, racial identity, sexual identity, and the various roles each child choses. We look at people in these relationships as role models and the more prestigious the model is, the greater the impact may be. The desire to be like this other person may motivate a person to act, however the ability to understand and apply the behaviors will affect success and continued motivation.

It should be obvious that characters in literature are models of a variety of behaviors, many of them social.

Books are a windows into life where learners view many interactions, identify them as positive and negative, and make choices as to which may be worthy for them to try in their own life.

It would also seem likely that student's choice of literature and which characters they choose to imagine as models, for them, will be related to their experience with peers, heroes, and events they have experienced in their lives.

As they knowingly or unknowingly search for different behaviors to try out in their world, literature will provide a valuable source for their social and behavioral development.

Most books have characters who interact with other characters and provide a rich source of social behaviors, most of which are appropriate for children.

Other times characters don't change, but there can be characters who oppose each other with opposite sets of interactions for the reader or viewer to contrast from one to the other. Change can be low key or used to propel the plot along or used as an important style element that sets the tone.

In books like, There is a Boy in the Girl's Bathroom, the theme and plot rely heavily on the main character's social interactions. The author explores different behaviors and their social consequences through out the story with the main character.

The reader learns through the character's struggles and may relate to the character's desire to change as motivation to model and use similar behaviors in his or her life.

The style and tone is not didactic. It is based on logical consequence and encouraging understanding characters that are helpful in a low key manner. Slow progress or realization by the main character is often the case with no success until the climax.

This struggle becomes an important element of the theme, character development, style, and tone, however it does not have to be the driving force that moves the plot along. Nor is success usually expected or guaranteed as the story develops. The character may be successful at the end of the story, but the continuation of success may be questionable as to its likelihood after the story ends.

Some stories with strong characterization are: