We use levers more often than we realize. The can on the left is easy to open because of the actions of two levers: tab and lid.

This unit includes plans, to review or develop a deeper understanding of the simple machine, lever. It includes plans for scientific explorations, that humans have used over the years, to develop their understanding and create tools for survival and improve our quality of life. Scientific investigation, which makes careful observers to investigate how levers work and have improved our world with creative people using their ideas to develop technology to improve our lives.

The unit goes beyond an introduction of levers and provides information for a deep understanding of the lever as a simple machine. Additionally, it includes pedagogical information to provide deep insight into different aspects of planning and teaching.

Important preparations: To save a lot of time it is important to select a lever system and know how it will be used by the learners for their exploration. The easiest to manipulate and use to collect data is an equal arm balance. The characteristic that makes it easiest to use, is the fact that it can be balanced before weights are added to explore the relationship between weights and distances.

However, learners are often not convinced an equal arm balance works the same as a lever. Therefore, to use a system that looks more like a typical lever adds complexities, with the biggest being: the weight of a lever arm isn't balanced when the fulcrum is not centered. This can be resolved with counter weights placed on the lever arm before adding a load and measuring the effort force, see example.

Another problem is using a spring scale. Spring scales come in a variety of sensitivities and it is important to match the spring scale with the type of lever system and amount of weights being used. The K'Nex levers are interesting and easy to make, if you have access to them. However, they are made of plastic and will bend when heavier weights are used. Therefore, smaller amounts of weight will need to be used and it will be necessary to have a scale sensitive enough to measure gram increments.

The obvious problem: what materials to use as levers. If heavier weights are to be used, then solid rulers or wood works well. The biggest problem using wood is the weight of the not being balanced when the fulcrum is not centered. This can be negated with counter weights and balancing the system before exploring different lengths.

One last problem is the position of the spring scale. Upright or upside down. Many learners will need to explore a lever system and measure the effort with a spring scale upright and upside down to see there is no difference. See lever system with pulley.

This plan is designed for students who have very little prior knowledge of simple machines and levers. However, they should be advanced enough in their conservation skills, such as believing variables that affect simple machines will do so consistently and are probably conserved across the Universe (always be). Helpful to have some knowledge about an equal arm balance. 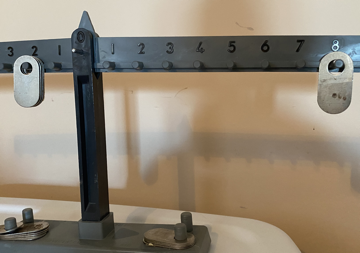 People may think machines have a motor or machines can provide more energy than used to run them. However, simple machines do not have motors, however, they are within many mechanical devices and can make work relatively easier by exerting force over longer distances.

Use accurate verifiable information to consider and decide how objects can be balanced or made more stable.

Science (claim evidence & reasoning) can be used to understand and explain cause and effect in the world.

When I experiment I ask questions, create and conduct experiments to answer those questions by collecting data with observations to describe how different properties change (become variables) when objects and systems interact to construct reasonable explanations. This helps me make claims, explain what is happening, and to predict what might happen in the future.

People use science to understand the world and make tools to improve life. By having positive habits of mind and often by working together they are able to ask questions, recognize problems, and seek answers and solutions with scientific ideas.

Social assessment to build a community of science learners

Consider if the area of study is appropriate for the learners. Do they have the background information.

Consider self assessment before the activities or include in each activity as applicable. Pre (diagnosis) and post (summative & generative). See more assessment information

Activities Sequence to provide sufficient opportunities for students to achieve the targeted outcomes.

What is a lever and how does it work?

References and other resources

For each group of pairs

Describe what you do.

Can you lift the load using one finger?

Does it always take the same amount of force to lift the load?

Where should you press to lift the load with the least force?

How can you use data to explain a lever system?

What tools did you use to gather data?

How did you measure?

How did you learn?

How did what you did compare to what scientists do?

How can they use what they learned today?

Record your findings for the day and write a short paragraph about how levers operate (provide individuals with an advantage).

Does the lever provide an individual with an advantage?

Did the amount of force needed to lift the load change when you moved the position of the effort?

What is the relationship between the position of the effort and the amount of effort needed to lift the load?

Be prepared to answer the following:

Set up a lever system different than in previous activities.

Draw and label you system.

Draw a lever system for each of the following:

Lab notes 5 - Levers in the World

To get you started. You can use the can on the right to get started. There are two ...

The lever is a solid bar or arm that pivots or turns about a point (fulcrum).

A first class lever has the fulcrum in the center. Between the effort force and load (resistance / weight).

A second class lever has the load in the center. The load is between the fulcrum and the effort.

A third class lever has the effort between the fulcrum and load.   The effort is always more than the load, (a mechanical disadvantage), meaning you always get less force out than you put in.

K'Nex lever: comments on construction and use.

The pulley is added to explore if the spring scale will measure the same whether it is upright or upside down.